« Music is a universal language, and in the music of Esteban Benzecry, we see the true soul of American music»

ESTEBAN BENZECRY is one of the most performed and commissioned Argentinian composer of his generation.

was premiere by the conductor Gustavo Dudamel at Gothenburg and then performed on tour with the Simon Bolivar Orchestra at Carnegie Hall of New York, Royal Festival Hall of London, and the Concertgebouw of Amsterdam.

His works have also been performed by renowned conductors such as Gustavo Dudamel, Miguel Harth-Bedoya, Diego Matheuz, Giancarlo

the Fort Worth Symphony Orchestra under baton of Miguel Harth Bedoya. He was invited in 2015 by Festival Présences of Radio France dedicated to the Americas.

During the 2015-16 season he was a composer in residence of the Orchestra Pasdeloup, who performed eight of his symphonic works in the

His concertos for violin, clarinet and song cycle for soprano and orchestra have been recorded on the NAXOS Records label by the Lviv National Philharmonic Symphony Orchestra of Ukraine under the baton of Pablo Boggiano.

In November 2020, his 5-act chamber opera GARASHA was premiered in the city of Kyoto, Japan, and performed in 2022 at the National Noh Theater in Tokyo.

Born in Lisbon, Portugal, in 1970 to Argentine parents. He grew up in Argentina where he studied musical composition with Sergio Hualpa and Haydee Gerardi.

He moved to Paris in 1997, where he studied composition with Jacques Charpentier and Paul Méfano at Conservatoire de Paris. He became a

Benzecry has received numerous awards by the Académie des Beaux-Arts de l’institut de France, Association of critics of Argentina, Platinum Konex Award as the most outstanding Argentine composer of the last decade, Guggenheim Foundation of New York and others.

Argentinean composer born in 1970. Esteban Benzecry is one of South America’s most renowned young composers.

He studied musical composition with Sergio Hualpa and Haydee Gerardi in Argentina.

He is the author of three symphonies (his first symphony, “El compendio de la vida” from 1993 is inspired on four of his own canvases) as well as symphonic and chamber works.

His most recent works attempt a fusion between rhythms with Latin American roots and the diverse aesthetic currents of European contemporary music creating, a personal language, an imaginary folklore.

“Le Monde de la Musique” has called him a distant heir to Villa Lobos and Ginastera because of his imaginative use of the Latin American musical patrimony. 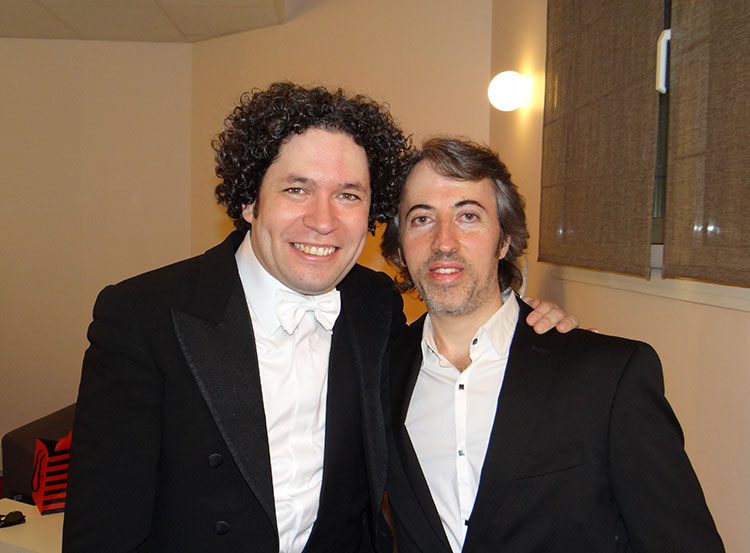 Gustavo Dudamel and composer Esteban Benzecry after a performance of his work “Colores de la Cruz del Sur” at Salle Pleyel of Paris with The Royal Concertgebouw Orchestra of Amsterdam.

Several of his orchestral works were recently recorded for the Naxos Records label by the Lviv National Philharmonic under the baton of Pablo Boggiano.

In 1992 he was named “The young revelation of the Season” by the Musical Critics Association of Argentina. The same association awarded him with the prize “The best Argentine work premiered in the Season 1994, 2006, 2009 and 2017” 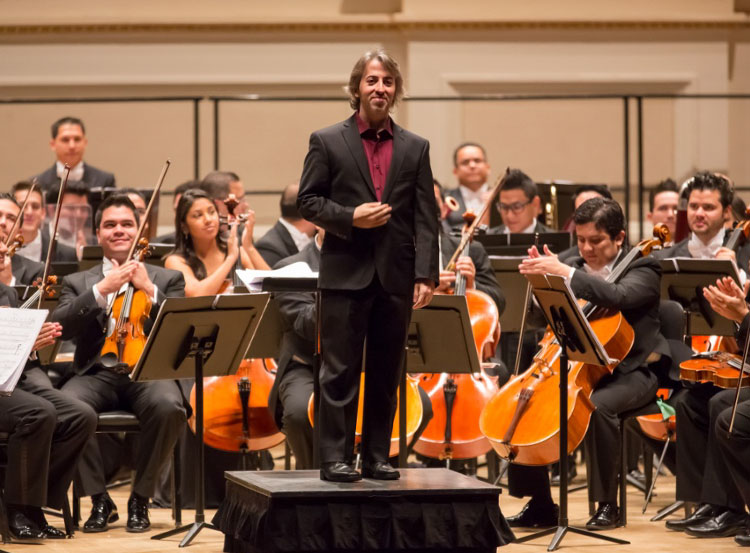 The Academie des Beaux-Arts de l’Institut de France awarded him the prize from the Foundation Delmas in 1999, the prize Tronchet in 2002, and the prize Georges Wildenstein in 2006. In 2004, he received the Fondation groupe d’entreprise Banque Populaire-Natexis Award for music. He is Resident Composer at the Casa de Velazquez of Madrid for 2004-2006 (Academie de France a Madrid). In 2008 he received a Guggenheim Fellowship for Music Composition. In 2019 he receives the Konex Platinum award as the best composer of the decade in Argentina.

He has been a fellow of the “Interamerican Music Friends of Washington” (USA) , Mozarteum Argentino and Academie des Beaux-Arts de l’Institut de France. In 1995 he was invited as Resident Composer at the Yehudi Menuhin Academy (Switzerland).

Benzecry lives in Paris since 1997. 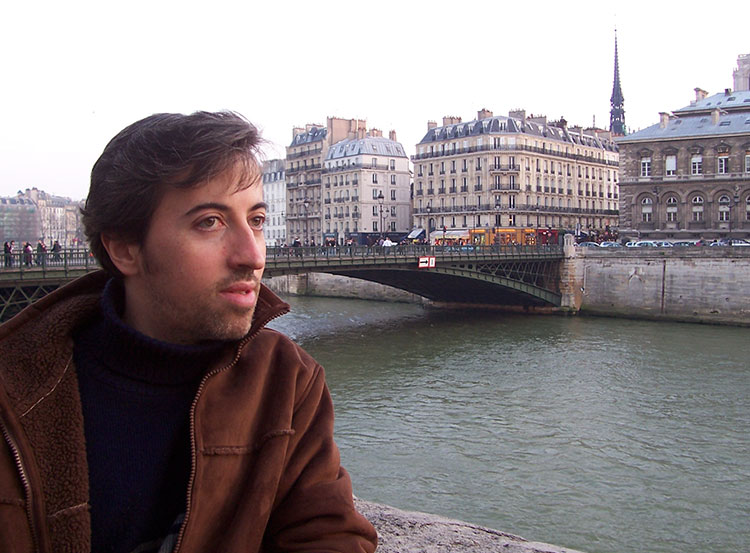 Esteban Benzecry in his early years in Paris.